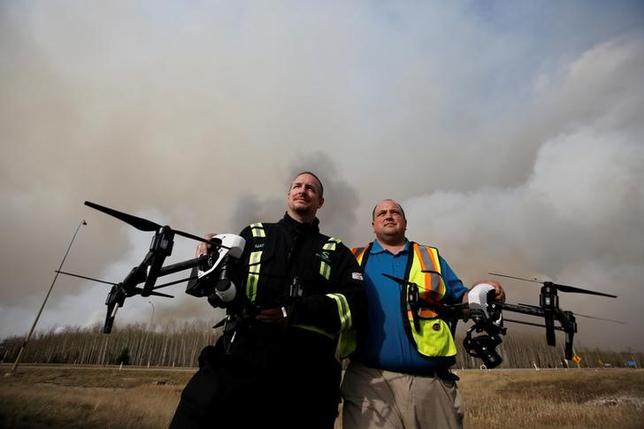 Fire-ravaged Alberta will use drones to investigate the cause of a huge blaze that has scorched the Canadian province and displaced some 88,000 people.

The drones use cameras outfitted with infrared, ultraviolet and traditional optical cameras to pinpoint the hottest part of the fire and trace it to its source based on time, wind and other factors. The cameras will shoot about 800 images, which are then stitched together in a process called fire-mapping.

The work begins on Tuesday, coordinated with the other air traffic, including air tankers and helicopters.

The images, if successful, will zero down to a spot on the ground with about a 30-foot (9-meter) radius where the fire is believed to have started. From there, investigators will search on foot for the cause, such as a lightning strike
or campfire.

Using the more traditional method of gathering images from helicopters, the fire’s cause could be narrowed only to half an acre, a much larger area to search on the ground, said Ron Windmueller, owner of Droneology, which supplies equipment and other services to ElevatedRobotic Services which has the contract.

A classic use case – in this case because the drones can get much lower and will not disturb the scene as a helicopter would. And of course, the drones in this case DJI’s, are expendable.

Small Drones Are Equalizing The Battle