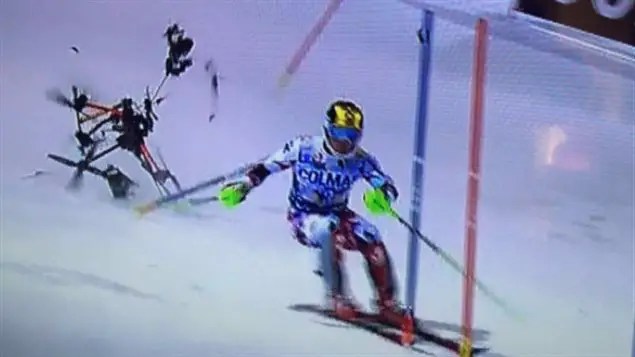 “The International Ski Federation (FIS) reacted swiftly in their decision to ban drones from all future FIS events. FIS men’s race director Markus Waldner said drones will be prohibited “as long as I am responsible… because they are a bad thing for safety”.

The major problems we are seeing in unmanned aircraft operations today appear to be cultural. Many UAS pilots do not come from a culture of safety, authority, responsibility and accountability because they have not been required or trained to operate that way. Perhaps the fact that they are not actually inside the vehicle, adds to the problem and the tendency for pilots to push the limit or make high risk decisions. Most of those cultural differences can be resolved through education, training and experience. Unfortunately most regulatory agencies around the world are more focused upon accountability than they are on safety and training in the drafting of new regulations.

Let’s be really clear. There are two things going on here. First, Italy (unlike Austria, Switzerland and others) allowed this type of UAS operation. Second the FIS wanted cool coverage of their event and had set up rules for it with their broadcast partner, Infront Sports and Media to fly the drones. My bet is that the drone had been up before covering other events and runs.

The initial technical report indicates a malfunction of the drone. According to the drone operating company, the most likely reason is a strong and unforeseen interference on the operating frequency, leading to
limited operability.

Meaning that what appears to have killed the drone was the comm link.

Detecting this, the pilot followed the official security procedure, purposely flying the drone as close as possible to the ground before releasing it. The aim was to destroy the drone, in order to prevent it from losing control. So according to this, no doubt written by the damage control team, the pilot was following procedures. Perhaps imperfect ones but early days.

Terry’s point is that the PIC should have known that he had no good out. But he chose to fly anyway – we know why without asking – he had agreed to do it days or weeks before when he was offered the gig. Perhaps being Italian he had the bravura to figure that he among all men could pull it off. Maybe he had done it enough already at this event on this course to be confident.

Terry suggests that the risk of losing his insurance and being exposed to a suit might create a culture of responsibility where things like FAA registration will not. Depending on how the ass covering and spinning goes, it’s a pretty safe bet that the PIC will not get a lot of work.

IMO this is the uncrossable gulf between aviation and flying robots. It is also why there will never be a single unified law covering drone operations in the US.

But the real issue – the risk be inherent in every UAS flight – is the one that is alleged to have led to this accident. The comm link. Which is something that the insurance industry should take an active interest in setting some standards for.